This video is undoubtedly fake, but I found it interesting (and entertaining) nonetheless, and thought I’d share.

It surfaced on May 9, 2013, and allegedly contains evidence of a broadcast intrusion that occurred on November 18, 2007 at 3:43 PM on Fox affiliate station Fox 30 in Jacksonville, Florida. An episode of Matlock appears to be overridden by a strange man wearing a plague doctor’s costume.

The man gives the viewer bizarre, seemingly nonsensical instructions. Much of it is unintelligible, but what can be understood is very peculiar.

Here’s an incomplete transcript, which I’ve edited while referencing what was posted by Reddit user PixelatedZombies back when the video first appeared:

“Go west on Pine Street, look for…[inaudible]…Jacksonville Jaguars on it. Go inside. Once you’re inside the building…the dude with the ponytail. Don’t worry, there is…[inaudible]. Once you do this, they will call for him, and he will come to you.

He will hand you a wet[?] pink slip. Once he hands this to you, cut it into eight pieces.

The beginning of the video states that the perpetrator “has yet to be identified,” but there’s probably a good reason for that: this broadcast intrusion never happened. The video effects used, which create the unconvincing distortion, are apparently stock effects found in the video editing software Sony Vegas.

More importantly, there were never any reports of an intrusion on November 18, 2007, and trust me, that would have been a big deal. Just remember Captain Midnight and Max Headroom.

Even so, I still find this video intriguing, and it raises some questions on its own. I also can’t fault it for style.

If an alien civilization ever decided to contact the people of Earth, how would they do it? Would they park their flying saucer out on the White House lawn? Would… 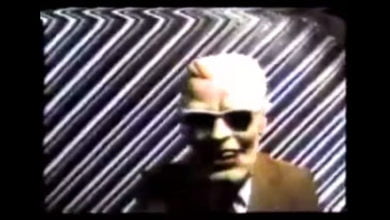 In the early morning of April 27, 1986, John R. MacDougall, a.k.a. Captain Midnight, interrupted the HBO broadcast of The Falcon and the Snowman with a color test pattern and…