When the proton beam shot through Anatoli Bugorski’s skull, he saw a flash “brighter than a thousand suns,” but felt no pain.

On July 13, 1978, the 36-year-old research assistant was working towards his PhD at the Institute for High Energy Physics in Protvino, a town south of Moscow, Russia. There, he had the distinction of experimenting with the largest Soviet particle accelerator, the U-70 Synchrotron*.

A day like any other. Until a simple malfunction occurred.

Burgorski, as anyone would, leaned in to investigate the malfunctioning equipment, placing his head right where the proton beam sent highly-charged particles.

Not long after, the side of his face began to swell up. 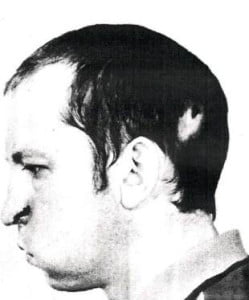 Like Daghlian and Slotin and their experiences with the Demon Core, Bugorski was hospitalized and the effects of the radiation were documented. It was assumed he would die in, at most, three weeks.

In the time that followed, Bugorski’s skin and hair near the beam’s points of entry and exit peeled away. Burned skin, bone and brain tissue revealed its linear path. You can see this in the image to the right.

However, Bugorski survived, though not without some problems. Over the course of two years, the half of his face hit by the beam became paralyzed as the nerves continued to burn away. He lost hearing in his left ear. Fatigue and occasional seizures were the only other lingering effects.

Despite these setbacks, he completed his PhD, continued his work as a researcher, and he is still alive today.

In any other situation, given that amount of radiation, Bugorski would have invariably died. However, no one had ever experienced such radiation in the form of a proton beam traveling near the speed of light through their face.

* At the time it was launched in 1967, the U-70 Synchrotron was the most powerful proton accelerator in the world, and remains the highest energy accelerator in Russia. The town of Protvino, which is located in Moscow Oblast, Russia, was constructed in 1958 specifically to house the Institute for High Energy Physics, and is one of many such towns built explicitly for scientific research.