A plutonium core is, simply put, the heart of an atomic bomb.

During the development of the first atomic bombs at Los Alamos, Nevada in the 1940s, scientists performed experiments on these cores to assess their critical mass, or the point at which they would “go critical” and experience a nuclear chain reaction.

This was important, both for the successful and efficient detonation of an atomic weapon, as well as the prevention of unintentional criticality during assembly and storage.

Obviously, there were serious risks involved.

Consider, for example, the fates of two scientists working on criticality experiments during the Manhattan Project: Harry K. Daghlian, Jr., and Louis Slotin.

August 21, 1945. At about 9:30 p.m., 24-year-old physicist Harry Daghlian returned to the lab at Los Alamos to continue work on a very dangerous criticality experiment. He was building a neutron reflector.

Coming in after hours and working alone were completely against safety protocol. But the on-duty guard that night, 29-year-old Private Robert J. Hemmerly, didn’t appear to have a problem with it, and Daghlian immediately got to work.

The experiment, while dangerous, was fairly simple: A small, 6.2 kg core, or sphere, of plutonium (Pu-239) would rest upon a square base, hollow on the top and bottom. As neutron-reflecting tungsten carbide bricks were placed around it, the core would slowly crawl toward criticality.

That night, on August 21, 1945, Daghlian retrieved the core of Pu-239 and placed it within the assembly. He began to stack the tungsten carbide bricks, first around the base of the core, then slowly over it. He reached the final layer.

As he went to place that final brick, however, his neutron counters indicated that doing so would cause the assembly to go supercritical. Daghlian hesitated. He slowly, deliberately, pulled his left hand back and began to withdraw the brick.

The Last Days Of Harry Daghlian

The brick landed directly on top of the core, which instantly reached prompt criticality. A burst of heat and a faint blue glow shot through the room.

Instinctively, he reached for the brick and attempted to knock it away.

You can imagine the terrible resignation Daghlian felt as he set to work partially disassembling the brick pile. After he finished, he removed the fallen brick and the core returned to a stable state.

His life, at that point, was effectively over; he had not only received the initial burst of neutron radiation, but also a slower, fatal dose of “gamma radiation and beta burns.”

One image, however, is widely available — the haunting picture of one of his hands. 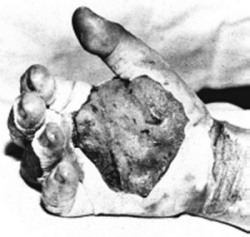 May 21, 1946. 3:20 p.m. Louis Slotin and seven other scientists were performing their own criticality experiment. It wasn’t altogether necessary; Slotin was demonstrating the experiment to his replacement, Alvin Graves.

In fact, there’s reason to believe Slotin had grown weary of bomb-making, and was no longer interested in being the government’s go-to “bomb putter-togetherer” (he had also been referred to as the “Chief Armorer of the United States”).

He’d wanted to return to the University of Chicago and get back to more ordinary, peacetime pursuits, such as biophysics and radiobiology.

This particular version of the experiment called for two beryllium-coated half-spheres around the core — the very same core of Pu-239 that had claimed the life of Harry Daghlian a year before. They would, like the tungsten carbide bricks, act as neutron reflectors.

With his left hand, Slotin moved the top half-sphere over the core and began to lower it. Neutron counters gauged the activity, and began to tick.

He prevented the spheres from closing around the core entirely (and causing it to go critical) with a single flathead screwdriver, which he manipulated using his right hand.

This was, to say the least, very risky. Typically, they would use shims, but Slotin had performed the experiment numerous times without incident, and wasn’t particularly worried.

This time, however, the screwdriver slipped.

The reflectors closed around the core. There was a flash of blue light and a wave of heat, and the neutron counters ticked wildly. In that moment, Slotin knew. The core had gone supercritical, and he would soon be dead.

“Slotin experienced a sour taste in his mouth and an intense burning sensation in his left hand.”

Slotin tossed the top half-sphere away from the core and onto the ground.

Several of the men present ran from the room, but were soon called back to mark their positions during the time of the accident. Calculations were then made to discern the radiation exposure each of them had received.

The results? Most of them had likely received enough radiation to considerably shorten their lifespans, but they’d live to see another day.

Slotin’s exposure, however, was far too intense, more than any one man had ever experienced.

“Everybody should make it, except me. I’m dead.” — Michael Merriman, a fictional combination of Harry Daghlian and Louis Slotin, in the film Fat Man And Little Boy (1989)

Several blood transfusions were performed throughout the ordeal, as well as many other procedures, but there was ultimately nothing that could be done.

Like Daghlain, Slotin was photographed and the progress of the radiation poisoning was documented, providing a better understanding of its effects on the human body.

Detonation of the Demon Core, and Improvement Of Criticality Testing Safety

The plutonium core that killed both Daghlian and Slotin became known as The Demon Core, and was eventually detonated in the Pacific Ocean at Bikini Atoll on July 1, 1946, as part of the Operation Crossroads tests.

Later criticality experiments were revised for safety, and were no longer performed by hand. Instead, they used remote-controlled devices in separate buildings.

There were, of course, several accidents that occurred during the Manhattan Project. But the incidents involving the Demon Core are a haunting and terrible reminder that the forces of nature should not be handled lightly.

Writer, blogger, and part-time peddler of mysterious tales. Editor-in-chief of Stranger Dimensions. Might be a robot.
Latest
Check It Out
Close