A pentagram is a five-pointed star with a long history of symbolism throughout various cultures, dating back to the earliest writing of Mesopotamia.

In ancient Greece, it could be found in the Pythagorean Pentacle as a “sign of recognition” among Pythagoreans. Across the globe, in Chinese tradition, the pentagram instead represents the Five Elements, or Wu Xing.

Of course, for the purposes of a paranormal blog, the pentagram stands as a symbol of the occult, usually associated with magic. Aleister Crowley himself apparently used the pentagram during his magick practices and ceremonies. It can also be found in the official logo of the Church of Satan, enclosing the head of a goat.

Many Wiccans, on the other hand, view the pentagram as a symbol of their faith, preferring to disregard the biases formed by popular culture and its often “dark” associations.

Perhaps it’s not so strange, then, that a giant encircled pentagram happens to be in a field in Kazakhstan, about 12 miles west of Lisakovsk.

In 2013, Live Science was on the case, speaking with archaeologist Emma Usmanova about Kazakhstan’s mysterious pentagram. Turns out (if we go with this particular story and not the intense magical ceremony theory), the star is actually the outline of a park created not too long ago, back in the days of the Soviet Union.

According to Usmanova, they commonly used the shape as decoration, and in the case of this particular pentagram, what we see are in fact old roadways that have become “lined with trees.” The park has long since been abandoned.

So, end of story? Case closed? The Soviet Union just kind of liked the design? A cursory glance tells me that some aren’t convinced by the “official story” here, that the giant pentagram holds more secrets than we currently know. They point out that the pentagram, when viewed on Google Maps, appears to be inverted, which some believe points to a dark or Satanic symbolism.

Did it come from the stars or a starving artist? That was the question on everyone's mind when wildlife surveyors discovered an unusual 12-foot-tall metallic monolith in the deserts of…

Every day, anomaly hunters are busy at work scouring the deepest darkest depths of Google Earth to uncover the strangest of things. And what have they found, now? A gigantic…

Over four years on, and we still don’t know exactly what happened to Malaysia Airlines Flight 370. In March 2014, the Boeing 777 vanished over the South China Sea, leaving… 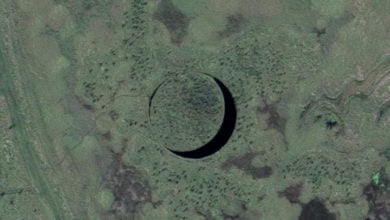 Here we have El Ojo, the Eye of the Earth. Located northwest of Buenos Aires, Argentina, this strange circular island rests just inside what appears to be an almost perfectly…