The above video from the Massachusetts Institute of Technology highlights a “particle robotics system,” which consists of many smaller robots working together to accomplish goals.

When alone, the small disk-like robots can contract or expand, but are otherwise unable to move. However, when added to the larger robotics system, they can move together as a single unit toward a light source. The engineers working on this system refer to the smaller robots as particles, and have taken their inspiration from nature:

“The robot is actually inspired by the idea that natural organisms have cells, and these cells connect together and work together to form larger organisms.” – Daniela Rus, MIT CSAIL Director

What’s particularly interesting about this robot (or group of robots) is that none of the smaller particles directly communicate with each other. Instead, they each broadcast general information regarding light intensity, which other particles can then use to determine when to expand or contract.

As MIT News explains, particles that sense the highest light intensity expand first. Then, as they contract, the next group of particles expand, and so on, moving the whole group forward.

Because each particle only broadcasts information and isn’t directly connected to any other, this allows new particles to be added, or even taken away, seamlessly.

The researchers aren’t nearly finished with the concept — they hope to eventually make more advanced and smaller particles, and ultimately one day create “robotic cells” that can form different robot bodies depending on the required tasks.

Of course, science fiction has shown us how this sort of thing could end. As robotics engineer Hod Lipson says of their research, “It’s a bit like the proverbial ‘gray goo.'” But, you know, hopefully not too much like that. 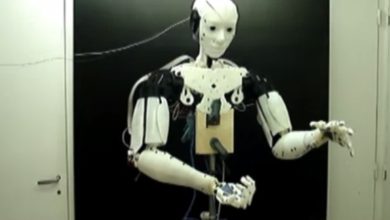 Meet InMoov, a fully 3D-printed robot created by sculptor Gael Langevin. The robot can be printed out, piece by piece, using a 3D printer, then put together and programmed using…

So I'm reading an article on Mashable about a new robot that can, what else, make sandwiches. It's very interesting; you should check it out. However, after watching the video accompanying…

The mad scientists over at Harvard University (in a collaboration with DARPA) aren’t content with simple robotic Meshworms and artificial jellyfish. Now, they’ve created “soft robots” that can change their colors…