Picture this scene: a group of ghost hunters are standing quietly in the abandoned cellar of an old haunted mansion. It’s night. One of them is talking to the air, another takes readings with an EMF meter she bought on eBay. Things are getting downright spooky, and everyone is having a good time. Mostly everyone.

But something happens. One of them feels a pressure against his back, something that burns and seems to push him forward. He cries out, and the startled team gathers to investigate. They lift up his shirt, and what they find shocks them all: three red marks sliding down his back.

The Anatomy of a Spiritual Attack

If the above story sounds familiar, that’s because it happens all the time. Or, at least, that would appear to be the case. Look and you shall find – tales of ghostly assaults, scratches, bite marks, welts, and bruises that spontaneously manifest on an individual’s skin, often during a paranormal investigation.

But are these truly paranormal, or could there be rational explanations for what, at first glance, would appear to be legitimate proof of something beyond our comprehension?

While I’m sure most of us have experienced the odd “unexplained” scratch – maybe on our hands or arms, usually after a night’s sleep or perhaps due to our tendency to run into things (or is that just me?) – these alleged scratches, or so it’s said, are far more sinister in nature.

Three scratches in particular may be interpreted as “demonic art,” a mockery of the Holy Trinity, as claimed by some paranormal investigators. Some, in fact, believe different marks have different meanings.

As I said, you can find many, many examples of these spectral scratch marks on the Internet. But here’s an interesting one that happened in 2014. A news team were reporting on an alleged haunting at a property in Hanover, Pennsylvania when the cameraman – while filming – suffered a scratch and burn on his wrist.

“Because you’re telling the story. Because you’re putting it out there … right now that is their way of a warning,’ Deanna Simpson said while putting holy water on Petrillo’s arm.”

The homeowner, in that case, claimed to experience “terrifying apparitions” and strange dreams, as well as doors opening and closing on their own. She also captured what she described as a “seven-foot-tall shadowy figure” – a demon – on film, which you can see in the above video.

How do we explain any of this? There’s, of course, your stock explanation, the one we all keep handy: it’s a hoax. For the above story, that may very well be true. These things can also be accidents or normal occurrences, only thought to be paranormal after the “priming” that investigators tend to experience before entering those haunted locations. But that’s not very exciting, is it?

On the ordinary side, we have a few possibilities. The presence of raised red marks on the skin – welts, for example – could indicate something like hives. An allergic reaction, perhaps to mold or dust or any number of potential allergens. Another possibility is something called dermographism, a peculiar skin disorder in which the skin may become raised and inflamed at the slightest touch.

On the supernatural side — the one we’re all here for — we could be dealing with poltergeists. This would be the physical manifestation of some kind of psychic energy by the individuals being haunted. A poltergeist, as we’ve talked about before, can arise from any kind of emotional or psychological turmoil and cause all sorts of bizarre activity. If it occurs during a ghost hunt, perhaps it’s a manifestation of the fear or stress of one of the “hunters.”

Finally, there is the most common paranormal explanation: that these scratches are caused by negative spirits or, worse, demonic entities.

A Word On Demons

This final explanation raises a question for me, though. If these are, indeed, malicious demonic attacks, why do they stop at the surface? Scratches or welts that appear mysteriously on the skin are terrifying, I imagine, but these entities presumably exist unbounded by spatial dimensions. And if that’s the case, why wouldn’t a demon scratch an eye or part of the brain or the heart?

More importantly, if a demonic entity could scratch, why couldn’t it do more? Well, maybe they do…

I’m not a paranormal investigator. I wouldn’t even call myself a paranormal researcher, to be honest. But I’ve read enough and seen enough to say that, even after all the research I have done, I’m still as in the dark as ever.

Nothing about the paranormal confounds me more than all the so-called evidence that seems to lead us nowhere. The pictures, the videos. These unexplained scratches and weird marks. The anecdotes. I suppose it wouldn’t be paranormal if we had the answer — then, it’d just be normal. But I often feel like we’re walking in circles.

Anyway, what do you think? Are most of these scratches hoaxes? Inadvertently self-inflicted wounds? Allergies? Or the marks of demons wishing to do harm to us mere mortals? Let me know your thoughts.

A lot of theatres seem to have resident ghosts lingering around these days. The Orpheum Theatre in Memphis, Tennessee, for example, hosts the ghost of a young girl named Mary.… 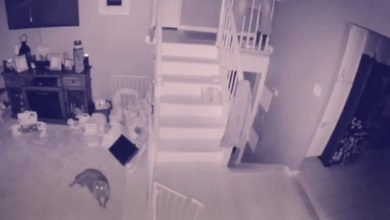 Earlier this month, Long Island YouTuber Joey Nolan shared footage of what he claimed might've been a strange and supernatural "visitor" walking through his kitchen. The short video garnered nearly…

Tags:GhostsHauntingsPoltergeists
Latest
Check It Out
Close