Think zombie apocalypses are impossible? Wrong! They happen all the time.

Meet Cordyceps. This is a fungus that infects insects and arthropods. Oh, but this isn’t just any kind of fungus. It’s special.

This one attacks a host, replaces its tissue, and sprouts ominous stems that grow outside of its body. These stems eventually release spores into the air, infecting other hosts.

What’s even more interesting is that there are many different Cordyceps species, each for a separate species of insect.

Ants have it particularly bad.

Certain species of Cordyceps, such as Ophiocordyceps unilateralis, can alter its host’s behavior.

In this case, once the ant is infected, the Cordyceps causes it to climb up to the top of a plant. The ant then attaches its mandibles to the leaf or stem so it cannot move, and then simply waits to die. Eventually, the fungus grows out of the ant’s body, and releases spores into the air.

Here’s a fascinating excerpt from BBC’s Planet Earth that has some footage of this mind-altering Cordyceps in action:

“The fungus is so virulent, it can wipe out whole colonies of ants…”

Ant colonies, however, are wise to Cordyceps; if a member of the colony is infected, healthy ants will carry the infected away from the colony, hopefully avoiding infection themselves.

Here are a few other images of Cordyceps in action, though be sure to check out this wicked photo of a dead tarantula, first.

Cordyceps only affects insects; it can’t infect humans. In fact, it’s apparently often used to treat certain ailments, such as respiratory disorders, and can boost the immune system. I guess. I’ve never tried the stuff.

…and I don’t really want to.

But what if Cordyceps ever evolved to include humans on its host roster?

It’s a terrifying possibility, one that game developer Naughty Dog explores in their PlayStation 3 game The Last of Us. Check out this video to hear about their inspiration and see some of their “zombie” designs.

And here are a couple examples of what Cordyceps-infected humans look like in the game:

Well, let’s hope it doesn’t come to that. 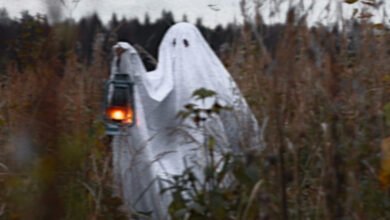 New Paranormal Surveys – And Who Thinks Time Travel Is Possible?

Are you afraid of ghosts? You're not alone. This year's happily titled Chapman University Survey of American Fears (Wave 7) asked over 1,000 U.S. adults what they fear most, and…

Zombie Bees Are Coming To Get You, Barbara!

I don't want to freak anybody out but, uh, Zombie Bees. Apparently, honey bees in California and South Dakatoa are falling victim to a particular type of parasitizing fly, called…

Clairvius Narcisse, The Man Who Was A Zombie

On April 30, 1962, Clairvius Narcisse, age 40, arrived at the Albert Schweitzer Hospital in Haiti. He had a fever, and felt something like bugs crawling on his skin. Doctors noted a…

Tags:Zombies
Latest
Check It Out
Close