I don’t post about UFOs much anymore, mostly because I don’t find them all that interesting. But weird stuff on Google Maps? I’m all over that (for some reason).

This strange, UFO-shaped anomaly was spotted in Google Street View by Andrea Dove as she searched for directions in Jacksonville, Texas. It looks like a flying saucer, but misty and cloud-like.

The media, surprisingly, has jumped all over it.

You can view this strange object on Google Maps yourself by clicking here.

ABC News also reports that a similar object can be seen in the Street View of Sky City Casino Hotel in Acoma Pueblo, New Mexico (just go into Street View and scan up when you get there).

The Jacksonville, Texas Street View image, according to Google, was taken in July of 2008. The New Mexico image, March 2008. So it’s unlikely (as much as the media would like to play up the mystique) that anyone would have noticed anything recently.

Personally, I’m voting that it’s , or something similar. It may also be, as some say, a lens flare. Or I could be wrong, and what we see here is a pan-dimensional alien craft mid-way through teleportation back to its home universe.

Update: Lens flare it is! (Thanks for the tip, Max)

I knew it wasn’t a UFO but…it’s fun to pretend.

In 1946-1947, Admiral Richard E. Byrd, of Hollow Earth fame, spearheaded Operation Highjump, a military training exercise in Antarctica. Many have since claimed that this was actually a cover-up for… 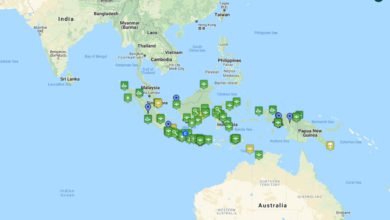 While not technically a map "anomaly," here's a mapped collection of reported UFO sightings and other unidentified phenomena reported around Southeast Asia, compiled by BETA-UFO Indonesia: "We came out of… 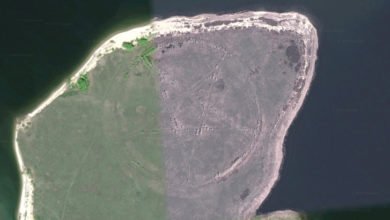 A pentagram is a five-pointed star with a long history of symbolism throughout various cultures, dating back to the earliest writing of Mesopotamia. In ancient Greece, it could be found…