It was a cold, dark morning in outer space on December 16, 1965. Two astronauts aboard the spacecraft Gemini 6, Walter M. Schirra and Thomas P. Stafford, had rendezvoused the previous day with Gemini 7 and their fellow astronauts, Frank Borman and Jim Lovell.

It was the first crewed space rendezvous in human history, unless the Atlanteans were up to something we don’t know about.

But just before re-entry, Gemini 6 reported something very out of the ordinary:

It looks like it might even be a, uh…Very low. Looks like he may be going to re-enter pretty soon. Stand by one…You might just let me try to pick up that thing [Or, “It looks like he’s trying to signal something”].”

Ground control then heard something they probably never expected: “Jingle Bells” played on harmonica, and the sound of literal jingling bells in the background.

“We got him too, six!” Gemini 7’s Jim Lovell responded with laughter.

“You’re too much, six,” Elliot See at Mission Control added.

It was all a prank set up by the two Gemini 6 crew members, who practiced their skit right before takeoff. No one else knew what they had planned.

In 1967, Schirra donated his tiny Hohner “Little Lady” harmonica to the Smithsonian. You’ll find pictures of both it and the tiny jingle bells here and here.

According to Smithsonian Magazine, together they’re considered the first musical instruments ever played in space, with “Jingle bells” the very first performance.

Speaking of holidays in space, this month NASA released the above composite image of the “inner part of our galaxy.”

Its bright and various colors, which signify the different “emission mechanisms” of the giant molecular clouds and other features in the Milky Way, led NASA to call it the Cosmic Candy Cane. 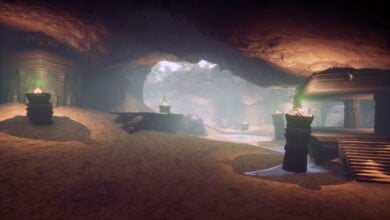 [Trailer] Explore the Lost Continent of Mu In Expedition Agartha

If there's one thing I like, it's Agartha popping up in random video games. So here's a teaser trailer for an upcoming "first person medieval PvPvE" called Expedition Agartha.Read More…