Is Bigfoot Out There?

Bigfoot sightings are often dubious, but always entertaining. And sometimes, you’ll come upon a video or an account that really jumps out at you, and makes you wonder.

Throughout 2018, I’ll be updating this page with alleged evidence and Bigfoot sightings. I may also include stories about Skunk Apes, Yowies, Yetis, and other hairy humanoid cryptids who decide to join the fray.

Perhaps, as the months pass, this page will become a compelling resource for various 2018 apelike cryptid encounters. At the very least, you may find something to pass the time. Afterwards, you may also want to check out 2020’s sightings. Let’s get started.

A report submitted to the Australian Yowie Research website detailed a Yowie sighting in November 2018 in Witheren, Queensland, Australia.

A truck driver was making a delivery to a secluded area atop a hill. On his way back down, he saw what looked to be a boulder roll off the embankment and onto the road in front of him. However, it turned out to not be a boulder — the object “stood up,” revealing itself to be a tall, hairy humanoid figure, with a face “a bit like a chimpanzee.”

Agitated, the alleged Yowie grunted and hit the truck with its hand, before disappearing off “into the bush.”

The report is accompanied by drawings of the creature’s relative size to the truck, as well as a drawing of its face.

11. A Strange Face in the “Bigfoot Forest”

The Bigfoot Forest Vancouver Island YouTube channel uploaded some curious footage on November 22, 2018. While very short, the video purports to show more than just a simple Bigfoot lurking among the trees — this, says the uploader, is evidence of a mysterious forest people (presumably Bigfoot) utilizing “pranic energy” to remain hidden.

While the evidence provided by the video may be nothing more than pareidolia in action, the concept of Bigfoot hiding behind a “misty” mystic veil is an interesting one, indeed. The uploader also mentions hands “that seem to glow a misty grey to white light,” allegedly visible as the camera pans over the area.

10. A Canadian Bigfoot Sighting in the Snow

In this curious video, date unknown but uploaded this month, a Canadian trapper is out exploring an old campsite in Nordegg when he spies a dark, hairy figure lurking behind a tree. According to the video’s description, “he was able to shoot some video footage of a strange looking creature watching him move through the woods.”

At about 1:02, you can see a slowed close-up of the alleged possible sasquatch, which appears particularly hairy and, perhaps, with characteristics unlike the creatures found in most other Bigfoot sighting reports. At the end of the video, the trapper gets a bit scared and runs off.

As usual, opinions are mixed on the validity of this sighting. However, for the most part, commenters seem to find it compelling, and are requesting more information on the date and specific location of the event.

A Michigan resident was outdoors filming himself riding in circles on his ATV in early May. Little did he know, until after reviewing the footage, that he had an unexpected spectator: Bigfoot.

“THIS IS NOT A HOAX,” reads the message sent to YouTube channel Nv Tv along with the video, “I was trying to film me doing donuts on my four wheeler and I took a couple shots but looking at this one I saw this without noticing it while on my atv I think it’s a BIGFOOT…!!”

The video shows a young man setting up his camera before jumping on his four wheeler. At roughly the 0:55 mark, a dark humanoid figure rises out of the distant bushes and stalks away into the forest. Perhaps he was disturbed by the noise.

Commenters have mixed opinions on this sighting. Some point out that the figure seems to have been waiting on cue to rise from the bushes, while others are more curious about why the camera angle is such that the alleged, albeit blurry, Bigfoot is the focal point, and not the ATV donut rider.

8. Bigfoot Runs Across Road Then Disappears In New Jersey

While driving through the Pine Barrens of New Jersey on April 7, a woman and her husband witnessed a brown humanoid creature — standing roughly six feet tall — lumber across the road behind them.

“I caught it in my rear view mirror,” she reported, adding that “it was definitely on 2 legs.” She then stopped the car and reversed, at which point her husband “thought he heard branches snapping and a splash into the water.” The potential Bigfoot was nowhere in sight.

Prior to this, the couple had been out of the car walking their dog around the area, which was near a pond and “a little path.” While doing so, they noticed a “musty mildew odor” that didn’t seem normal, which is what prompted them to leave.

The sighting occurred near Browns Mills, and was reported to the Bigfoot Field Researchers Organization. You can read the full account, as well as a BFRO investigator followup, at their website. The story was later covered by local news.

This video, uploaded April 14, alleges to show a brief, blurry clip of a Bigfoot (or other hairy humanoid) off a road near Severodvinsk, Russia.

The event happened on February 18 at approx. 7:45 p.m., when the driver caught sight of a humanoid wandering away from the road (which you can see at about 0:37 in the video). Stranger still, the driver apparently hopped out of his car and chased after the alleged creature, stomping through the snow to get a closer look. It’s unclear from the video what came of the event.

Many in the comments are more than a little skeptical.

According to the Daily Express, which also provides pictures of the prints, the footprints rest a staggering 48 inches apart. As they say, this suggests “a truly giant gait.”

The prints are of bare feet, and according to Barackman, their width is about 40% greater than that of a human’s foot.

Whether or not the prints are real, however, is up for debate. There’s also no word on why a mattress was abandoned in the woods. Bigfoot sightings are, however, common in the area.

A hiker in Australia captured a photo of what may be a Yowie while exploring the mysterious Coomba Falls, northwest of Brisbane. The Yowie is, essentially, Australia’s own version of Bigfoot, being a hairy humanoid entity that allegedly lives in the Outback.

The photographer, Christian Anderson, shared the photo on Facebook, and later spoke with the Daily Mail. He apparently plans to head back to Coomba Falls in hopes of gathering better evidence.

The photo is particularly blurry, leaving many to claim its alleged Yowie is nothing more than pareidolia, or a “blurry shadow.” Others think it might even be a ghost, due to the area’s sordid history with the massacre of Aborigional people in the 19th century.

This video’s a weird one. Many have decried its alleged Bigfoot “yelp” as nothing more than a dog (“My mom’s beagle,” as one commenter put it). However, I’m not sure that “yelp” is what the video is trying to bring attention to.According to Sasquatch Central, this video first appeared on February 19. A biker hears something screaming in the forest while driving down a “wooded road.” He’s wearing a head cam. This might explain why he’s filming the forest at that moment to begin with.

The first high-pitched yelp is very close to the camera, and actually does sound like a dog. But, if you ask me, it sounds like one being held by the passenger on the motorcycle.

Listen closely, and immediately after the yell (or bark), the biker says quickly, “Listen, listen, listen!” He stops the motorcycle, and then you can hear it – yelping out in the distance. Shortly after hearing the screams, he continues forward, but is shocked to then find himself being pelted by rocks, thrown by an unseen force.

Nv Tv claims this video was sent to them by a viewer, but even they’re skeptical.Uploaded February 15, the video shows a brief clip of a lone man hiking through a forest in Michigan, only to spot a hairy humanoid casually strolling through the foliage, itself. The man moves in for a closer look, then retreats.

“Bigfoot researchers say that these creatures will always hear and see you before you see it…So the fact he got this close to it…Makes you think…?”

Many commenters believe this video is a hoax, if not due to the way the “creature” walks (like a person in a suit, perhaps), then the fact that it’s somehow oblivious to the loud noises of the camera man. On the other hand, at least one commenter thinks there’s more here than meets the eye: “It looks like it had a young one and put that down by the tree and then walks off as if to draw attention to it and away from the baby,” she writes.

On January 18, the Southern Bigfoot Research YouTube channel uploaded a very short 12-second clip of potential Bigfoot audio, recorded during a recent hunt in the mountains of North Carolina. The sound, a rather high-pitched yelp, lasts about four seconds.

One commenter shared that they’ve hiked there and have also “heard stories of activity in that area.”

Many Bigfoot encounters involve these mysterious yelps and even screams, though many claim they are nothing more than the sounds of ordinary animals.

1. A Canadian Bigfoot Wanders the Wilderness

Footage from Canada alleges to show a large humanoid creature stalking about a forest. Details are, however, scant. The video’s description (the video has since been removed from YouTube) claims that a family walking “near a river in the Canadian wilderness” accidentally came upon the “giant Bigfoot like creature.”

Watching the video, you’ll see the alleged creature appear first at the lower center of the screen. It seems to perhaps draw to full height, then lumber off into the wilderness. While the video was uploaded to YouTube on January 5, it’s unclear when the footage itself was captured.

Many who have commented regarding the video believe the unidentified figure may actually be a bear. Others, however, are more convinced of its paranormal nature. “It’s clearly not a bear,” says one commenter, while another opines that “You can’t make out if it’s a bear or a Bigfoot or anything else.” 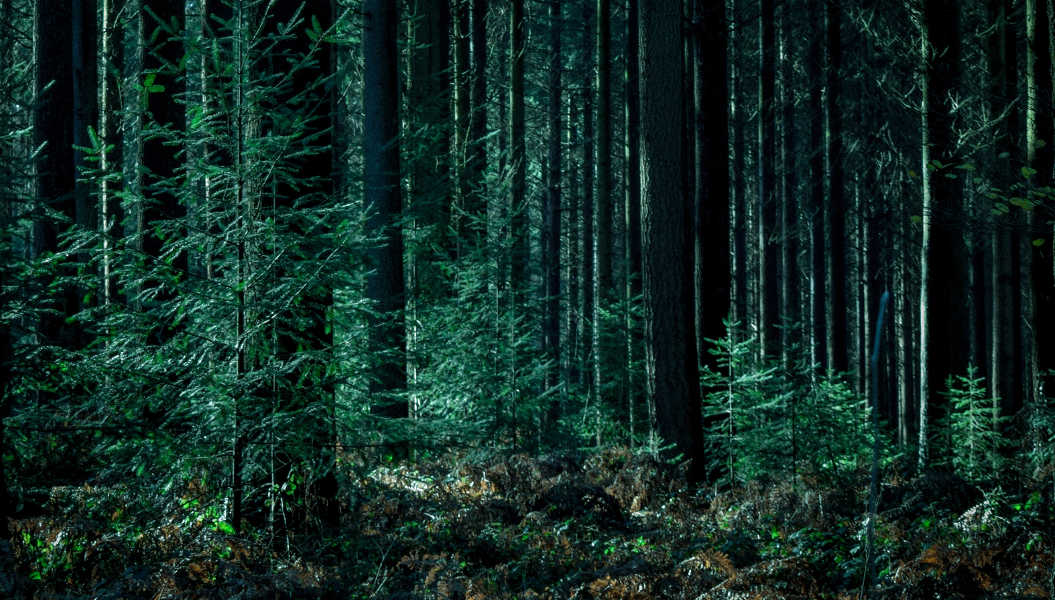 This one’s a bit complicated, because it actually involves an ongoing lawsuit against both the California Deparment of Fish and Wildlife and the state’s Natural Resources Agency.

In March 2017, Claudia Ackley claims she and her daughters witnessed a sasquatch while hiking near Lake Arrowhead, California. However, after reporting the sighting to local authorities, she was dismayed to find they didn’t believe her, stating that it was likely just a bear.

Their unwillingness to believe Ackley ultimately led to her lawsuit, which was originally set for a hearing on March 19.

“Respondents are, or ought to be, aware that the State of California is home to a large wild indigenous mammal, considered to be a giant hairy vertebrate, hominoid or primate, commonly known as Sasquatch.”

The lawsuit presented a case that Sasquatch, or Bigfoot, has a long history of sightings and evidence in California, and that the state is ignoring “one of the greatest discoveries of our time.” It also stated that Sasquatch is “likely a species at risk” that “very well may pose a threat to the health and wellbeing of the citizens of the State of California.”

However, before the March 19 hearing, attorneys advised Ackley to have the case dismissed, at least in its current form. According to the San Bernardino Sun, the original court filing was not quite up to par, and Ackley is now in the process of rewriting it and having the new version properly vetted by lawyers.

“I only get one chance,” she wrote on Facebook on March 17, “and I must do it correctly in order to proceed.”

1 2Next page
Popular This Week
Close