Researchers at the California Institute of Technology recently demonstrated the ability to levitate tiny nano-patterned objects using only light.

“We levitated centimeter-scale disks made of commercial 0.5-micron-thick mylar film coated with carbon nanotubes on one side. When illuminated with light intensity comparable to natural sunlight, the polymer disk heats up and interacts with incident gas molecules differently on the top and bottom sides, producing a net recoil force.”

What does it all mean, Basil? According to Phys.org, the researchers, led by mechanical engineer Mohsen Azadi, believe similar techniques of harnessing light could lead to the design of a spacecraft capable of reaching the nearest extrasolar planet in only 20 years. Such a craft could be “accelerated by an Earth-based laser light.”

As you can see in the demonstration video, we might be a ways off from that. But I look forward to eventually hitching a ride on an interstellar laser ship.

Ends of the World: The Green Goo

The Grey Goo may be hypothetically dangerous, a potential warning for those who think unrestricted, self-replicating nanobots are, you know, a good idea. But there’s something else out there. Something… 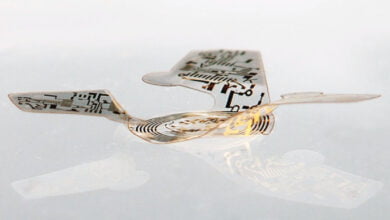 A team of scientists at Northwestern University in Illinois have designed the world's smallest flying structure in the form of a microchip, measuring nearly the size of a single grain…