Here’s a bit of UFO footage that has something for everyone: alleged alien crafts, HD night vision, even a laser pointer.

“This was at big bear with a ce5 team, myself included, in these videos you can see everything. from bugs, airplanes and satellites to the real good stuff the et crafts. this is raw footage, nothing added, very successful night. “

UFO hunter Eddie Garcia uploaded the sighting on July 6, 2020. He, along with a group of fellow enthusiasts (a CE-5 team, or “Close Encounters of the Fifth Kind” team), managed to capture what some believe is fairly authentic footage of one or more UFOs over Big Bear Lake, California.

At one point during the encounter, one of the objects appeared to flash, which may have been a reflection of the laser pointer. According to various CE-5 groups, laser pointers are considered tools to mark positions of witnesses on the ground relative to UFOs, or even signal at the objects in hopes of getting a response (though apparently they’ve lately shied away from using lasers, as they don’t want to interfere with any passing aircraft).

A lot of skeptics have praised the video, while others seem fairly sure the unusual objects were just insects. That said, there are other obvious insects flying around during the sighting, and the witnesses didn’t seem too interested in those. 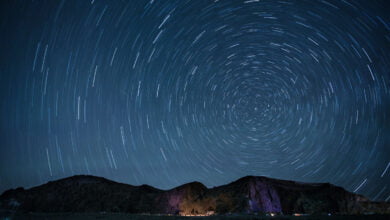 Starlink Satellites Once Again Confused For UFOs – Or Santa Claus?

In other news related to the very serious business of spacefaring billionaires, Elon Musks' Starlink satellites have once again been mistaken for unexplained phenomena. The Tribune highlights an incident from…

The Madonna with Saint Giovannino was painted in the 15th Century, and is often attributed to artist Domenico Ghirlandaio. It's one of many paintings that alien theorists claim depict an…