What makes for good Bigfoot evidence these days? Most of what we see comes in the form of blurry photographs and strange videos on YouTube, not to mention the numerous reports submitted to places like BFRO. But when an incident comes with both a police report and an image, you might think we’ve finally hit the jackpot.

On November 30, 2019, an individual called the Oregon State Police to report a possible Bigfoot sighting near I-84’s Hood River Exit 64 A.

According to the Umatilla / Morrow County Watch Facebook page, the witness frantically described the creature as “too big to be a bear,” looming far too high over the guard rail to be anything close to human. It was “walking upright.”

The dispatcher took the call seriously and looked at traffic footage from near the site of the encounter, and in fact did notice a large humanoid shadow lingering near the guard rail.

The Umatilla / Morrow County Watch Facebook page, which shares scanner reports from police and fire departments in Umatilla and Morrow County, Oregon, posted the traffic cam image of the alleged Bigfoot on December 15, 2019.

In the image, captured on November 30 at 11:18 p.m., you can see a mostly empty road with the large, unidentified figure slightly illuminated to the right. In the darkness, it really does appear humanoid.

REAL BIGFOOT SIGHTING HERE IN Oregon. State Police received a frantic phone call about a Bigfoot sighting near the Hood…

This ignited a good deal of speculation about what seemed to be a compelling and verified cryptid sighting. Some in the comments even claimed they could see the face of a grey alien in the image, made by the reflections of the street lights and passing cars. The scenario was filled to the brim with high strangeness.

Astute observers in the comments soon discovered, however, that the strange humanoid figure reported that night was still there on December 15, during the day. And it wasn’t Bigfoot — unless Bigfoot is actually a large bush, possibly a tree, one of several planted between the guard rails.

“Oh look, there’s two of them!” wrote one commenter.

Out of curiosity, I can also confirm that, as of December 28, 2019 at 10:23 a.m. PST, the bush/tree ‘Bigfoot’ is in fact still there (You can view all of this yourself at the Oregon Department of Transportation’s TripCheck.com).

And with that, another potential Bigfoot sighting has fizzled away.

While this may have turned out to be nothing, I think it’s interesting from time to time to highlight cases where the paranormal turns out to be something extraordinarily mundane.

Like that time a British police officer thought he saw a strange light over a hill, and called for backup. It was the moon. Or when a man in North Carolina thought he saw an alien spacecraft, but it was actually the Goodyear blimp (and that’s happened multiple times).

Strange things are out there. But not always.

Last month, we saw a full solar eclipse slice its way across North America, and with it came some pretty odd warnings about increases in paranormal activity and, yes, Bigfoot…

Thought Christmas was over? Well, put that tree back up because we've got one final Bigfoot sighting for the holidays. According to a witness report, submitted to the Bigfoot Field… 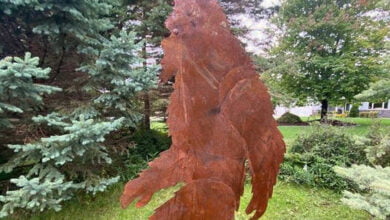 There's a new and bizarre phenomenon out there involving Bigfoot, but it might not be what you think. On September 8, 2020, the Carver County Sheriff's Office shared an urgent…