The Hernandez Family of Clovis, New Mexico witnessed something very unusual on their security camera Tuesday night. In fact, the would-be specter interrupted their dinner, leaving them only to wonder what strange otherworldly anomaly they had just witnessed.

And leaving us to wonder if it was anything unusual at all.

While the news report’s video describes the haunting figure as “gliding,” if you ask me, it looks much more like a ghostly child skipping across the driveway. It would almost seem to vanish completely, but you can just make out the shadow as it prances over into the next yard.

It’s wearing white, and seems to leave an odd, glowing trail behind as it moves (possibly due to the camera).

“I’ve never seen anything like that before,” Breanna Hernandez told local news station KRQE. Along with the footage of their driveway, they also provided surveillance footage of themselves eating dinner and seeing the “ghost” for the first time, as it happened.

Commenters on the video are reasonably skeptical. Some believe it’s just an ordinary person in white clothes, made more “ghostly” by the camera’s infrared. Similarly, others believe it’s an outright hoax – a kid in a sleeping gown running in front of the camera.

The owner of San Antonio's OnLive Hall of Fame Cafe temporarily closed shop earlier this month, after a spate of otherworldly goings-on. It's now reopened, but with a strange new… 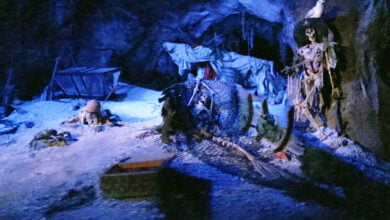 George, the Ghost of Disney’s Pirates of the Caribbean

They say a mischievous ghost named George haunts Walt Disney World's Pirates of the Caribbean. Now, I’ve only been on the classic ride at Disney’s Magic Kingdom maybe one or…