The Ghostbusters reboot confuses me.

I mean, let me just start with this: I feel the same way about Ghostbusters 2016 as I did about, say, the latest Teenage Mutant Ninja Turtles movie. Not a great movie, but I watched it for nostalgia’s sake and it didn’t ruin my life. It’s a movie.

But here’s where I’m confused: Is this a reboot? A remake? A sequel? They’ve said it’s definitely not a sequel, but even the new trailer starts with “30 years ago…” and some of the old cast are returning.

There’s at least one rumor floating around that has piqued my interest, so I’d like to talk about that. Because even if the movie turns out to be a total disaster, I do think this one idea is a pretty good one: The reboot might actually take place in a parallel universe.

Before I go any further, I want to credit Reddit user HunterGonzo for starting this particular conversation, though the idea of alternate universes in Ghostbusters dates back to, well, the original Ghostbusters.

Anyway, Dan Aykroyd himself (who, if you’ve ever listened to him speak, is very much into the paranormal and goes incredibly in depth with regards to the Ghostbusters universe) had this to say about a possible Ghostbusters 3 back in 2013:

Now that we have the first real trailer for Ghostbusters 2016, we can see if there are any clues pointing in this direction. And there are: A character says, “Someone is creating a device that amplifies paranormal activity.”

As the new team stands in Times Square, it looks like modern times melt away into something resembling 1970s New York. Advertisements for Taxi Driver (1976) and Boris Karloff’s Isle of the Snake People (1971) pop into view, and the streets become lined with smaller businesses and neon signs. Papa John’s winks out of existence: 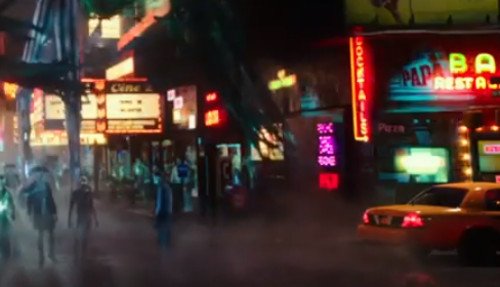 But it’s not all from one year – it seems like many different years coming together.

Could this mean that at least some of the original Ghostbusters will make a universe/time-hopping appearance, even if it’s just off-screen? Will the new team meet the old?

But, best case scenario for a reboot like this, I think Redditer MyGreatMachine has the most compelling idea, which is in line with what we know about the movie as it stands:

“Remember that Gozer hops dimensions/worlds, what if Gozer comes to this reality, with this ghost buster team and tries all over again? THE ORIGINAL CAST PLAY THEMSELVES IF THEY NEVER BECAME GHOST BUSTERS! thus Aykroyd is a cab driver, etc. The new team defeats this Gozer destructor…by crossing the streams and open a time rift to a world of the original ghost busters!”

Perhaps it’s even the actions of the original Ghostbusters – crossing the streams, or opening the containment system — that leads to the two worlds colliding.

It's been quite a few months since the Internet had its collective nervous breakdown over the fact that the Berenstein Bears are actually the Berenstain Bears. That revelation was a…

Have you ever heard of teleporting cats? I know what you're thinking: That's one of the most bizarre headlines you've ever read here at Stranger Dimensions. Well, you're probably right,…

Could the U.S. Air Force Take Out Godzilla?

Here's a fun little feature on what we'd need to fight back against a 300-foot-tall radioactive lizard, brought to us by Air & Space Magazine.