Another haunted doll sold on eBay this week, with the final bid ending the auction at £108 (about $182).

It’s a story you’ve heard before: a strange doll with bunny ears, something they hadn’t owned for long. But then there were odd sounds, and the owner’s son would sleepwalk and complain of weird scratches on his face and something bothering him at night.

“RELISTED DUE TO NON PAYMENT!!
IF YOU DON’T INTEND ON PAYING DON’T BID!!

Need this doll gone NOW!!
Since having this doll which is not very long.
(u may have seen this listed before not long ago)
We hear odd sounds and my son has been scratched on his face in his sleep. (pic no 3)
He’s started to sleepwalk.
I’ve done evps and caught a child like voice talking back!! My son says I sitting by mum. And someone says bk I sit here and I watch!! I get a very eerie feel from this doll when I first held it I got the shakes.
I don’t want this doll in the house anymore!!
This doll is very old and very worn plz study pics!

The seller also added this:

“I’ve have also woken up with bruises on my leg with no explanation as to how they got there. And my eldest son has also said he saw a boy in his room one night he said he had like a whitish face and he walked by and just flew out the window. :/”

I know, you’re sorry you missed the auction. But I’m sure there are tons of other weird, haunted dolls for sale. If you’re lucky, you might even find one that’s cursed! 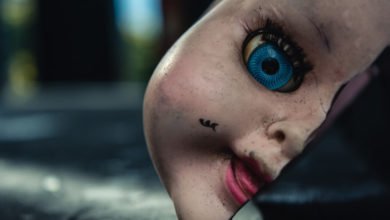 Both my limited horror movie knowledge (I recently watched The Conjuring and Annabelle) and years spent reading paranormal odds and ends, I know that, at least according to paranormal folklore,…

Dolls. Why'd it have to be dolls? The recent release of Annabelle: Creation has led to a number of odd haunted doll stories popping up. Real, fake – I'm not… 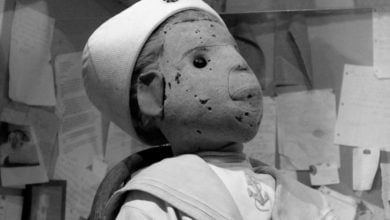 The Curse of Robert the Doll

In 1906, young Robert Eugene Otto received a doll from his family’s servant. It was, at first blush, unremarkable: a doll of wire, cloth and straw, with beige skin and…