NASA has discovered something of an anomaly between Mars and Jupiter: an asteroid with six “comet-like” tails.

The asteroid, designated P/2013 P5, is one-of-a-kind. It was initially discovered as an “unusually fuzzy-looking object” in the asteroid belt by the Pan-STARRS survey telescope in Hawaii. On September 10, 2013, the Hubble Telescope captured images, revealing its multiple tails. Then, on September 23, Hubble returned, only to find that the asteroid had changed appearance.

Astronomers believe it’s a “dying” asteroid. Its multiple tails are likely the result of rotational forces that will eventually spin off the asteroid’s remaining matter until there’s almost nothing left.

What caused it to begin spinning? NASA has an idea:

“One interpretation is that the asteroid’s rotation rate has been increased to the point where dust is falling off the surface and escaping into space where the pressure of sunlight sweeps out fingerlike tails. According to this theory, the asteroid’s spin has been accelerated by the gentle push of sunlight. The object, estimated to be no more than 1,400 feet across, has ejected dust for at least five months, based on analysis of the tail structure.”

You read that correctly. Radiation pressure from sunlight can move objects and, in space, cause asteroids of particular shapes to rotate. In this case, it’s believed the asteroid gained momentum over thousands of years, and now we’re witnessing its final spin into oblivion. 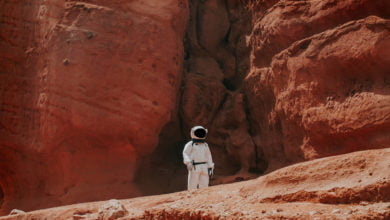 NASA has reportedly denied the existence of "insect- and reptile-like creatures" living on Mars, according to Fox News. NASA's denial was made in response to claims by Ohio University professor…

NASA’s Jet Propulsion Laboratory intends to send a probe 4.4 light-years away to our nearest star system neighbor, Alpha Centauri, by the year 2069.